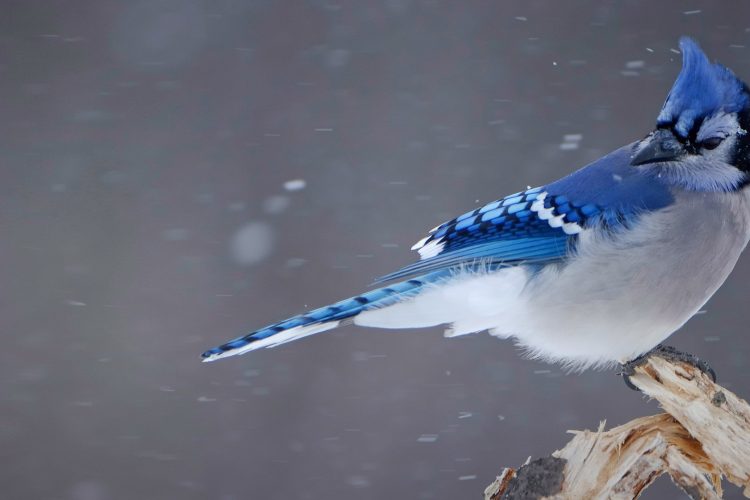 Though the call of the blue jay is common, especially just before seeing the bird, it can still be meaningful. It is not difficult to spot a blue jay with its striking blue, black, and white patterning with tufted crest on its head. The blue jay elicits different feelings for people, with some finding them beautiful, others a nuisance, and still others, just another bird. So, what does it mean when you see a blue jay? Read on to find out.

The blue jay, called the Cyanocitta cristata by the scientific community, is a highly vocal bird with a notable, bright appearance. They are known most for their jeer or call that is loud and somewhat jarring, but they have the ability to make other sounds like mimicking a hawk or even humans. Blue jays are native to the central and eastern regions of the US and have expanded beyond this to some degree as well. Though they tend to live in heavily wooded areas, they can adapt to urban areas when needed. Blue jays often bond for life, building close families and complex social systems among their society.

Based on their behavior alone, blue jays are linked to determination, loyalty, passion, determination, aggression, and even truthfulness. When a blue jay is threatened by some predator, they go on the offensive, not hiding or retreating in defense. Blue jays will dive bomb a predator or perceived threat, imitating a hawk to force others to flee, in order to protect itself and others in the family. Seeing a blue jay may be a way to call you into a reflective time on how you are responding and strategizing in the face of danger. In addition, since the blue jays have a complex web of kinship, it also represents strong social bonds. So, a sighting may be a call for you to reflect on relationships in your life. If they need repair, tending, or just appreciation, take note and be grateful or see it as a call to action to do what is needed.

Blue jays sing what researchers have dubbed the ‘whisper song’ that incorporated many different types of sounds, like whistling, clicking, and even gurgles. Blue jays have even been known to get creative and use their beaks against wood like a woodpecker to scare off predators. These abilities, plus the blue jays bold coloring are associated with the throat chakra and related, communication. If you see a blue jay, consider using a different form of communication than what you normally use, especially if you have been running into problems. Try new forms of communication, with and without words. Never be afraid to take advantage of the communication tools at your disposal.

In Celtic mythology, the blue jay is a trickster. This si also true of many Native American stories. Tricksters are never to be trusted, so if you see a blue jay in your life or in a dream around a certain person, someone is not to be trusted. Along similar lines, a blue jay dive-bombing you in a dream means something is bothering you and it needs resolved so you can find peace.

Blue jays have been tied to renewal and fertility because they tend to drop the seeds they are gathering as often as they store them. Since they are overly fond of acorns, the Celtic folklore credits blue jays with spreading the oak tree population as they gathered and then dropped the seeds. A blue jay sighting could mean that you are in a period of renewal that can be prosperous. If a blue jay makes his home near yours or visits daily, it can be considered a message from the spirits that you are following the right path. These curious, tenacious, fierce birds being near you often is a sign to stay on your path because it is the right one for you.

If a blue jay appears in your dream, it can mean you are conspicuous and others take notice of what you do and speak. This means you have power and responsibility on whatever platform you are on in your life. Take this as a sign you need to commit to thinking before you act or speak while listening to any information reflected back to you. Always be willing to take responsibility for your actions. Another meaning could be that danger is imminent. You may be an animal at the mercy of a hawk and the blue jay is serving to defend you or warn you. Try to stand strong in the face of the fear and take care of yourself so you are well rested if danger comes into your waking life. You are capable.

Blue jays may also serve as spirit animals, totem animals, or power animals. If the blue jay is your spirit animal it means you need to open up and share what is on your mind. Blue jays are never shy about making some noise, but know your limits. This means you can defend your territory, but when outmatched, back down and try a different approach. Let your spirit guide show you which battles are worth fighting. If the blue jay is your totem animal, you are drawn to it. It likely means you know when and how to speak up for yourself and others who cannot defend themselves. Blue jays often warn others of predators so all can benefit. The same is true when we speak up. Call upon your blue jay totem to help you establish strong boundaries and offer encouragement. As a power animal, the blue jay is one we identify internally. Call upon your power animal when you believe someone may be deceiving you. The blue jay will help you discover those lies or deception.